“Khol Do” is one of the most famous and controversial stories by writer Saadat Hasan Manto (1912-1955) . It is one of the masterpiece depicting the effects of violence during the partition of India on the people of the land. But unlike many others, Manto does not see the perpetrators as Hindu or Muslim, Hindustanis or Pakistanis, he just sees and depicts them as human beings with all their wilderness and barbarity. Given below is the entire story in English. The original story in Urdu is more poignant and heart wrenching.

KHOL DO – Open It

The special train left Amritsar at two in the afternoon, arriving at Mughalpura, Lahore, and eight hours later. Many had been killed on the way, a lot more injured and countless lost.

It was at 10 o’clock the next morning Sirajuddin regained consciousness. He was lying on bare ground, surrounded by screaming men, women and children. It did not make sense.

He lay very still, gazing at the dusty sky. He appeared not to notice the confusion or the noise. To a stranger, he might have looked like an old man in deep thought, though that was not the case. He was in shock, suspended as it were over a bottomless pit.

Then his eyes moved and suddenly caught the sun. The shock brought him back to the world of living men and women. A succession of images raced through his mind. Attack… fire… escape… railway station… night… Sakina. He rose abruptly and began searching through the milling crowd in the refugee camp.

He spent hours looking all the time shouting his daughter’s name… Sakina! Sakina!… but she was nowhere to be found.

Total confusion prevailed, with people looking for lost sons, mothers, wives. In the end Sirajuddin gave up. He sat down, away from the crowd and tried to think clearly. Where did he part from Sakina and her mother? Then it came to him in a flash – the dead body of his wife, her stomach ripped open. It was an image that wouldn’t go away.

Sakina’s mother was dead. That much was certain. She had died in front of his eyes. He could hear her voice. “Leave me where I am. Take the girl away”.

The two of them had begun to run. Sakina’s dupatta had slipped to the ground and he had stopped to pick it up and she had said, “Father, leave it”.

He could feel a bulge in his pocket. It was a length of cloth. Yes, he recognized it. It was Sakina’s dupatta, but where was she?

Other details were missing. Had he brought her as far as the railway station? Had she got into the carriage with him? When the rioters had stopped the train, had they taken her with them?

All questions. There were no answers. He wished he could weep but tears would not come. He knew then that he needed help.

A few days later, he had a break. There were eight of them, young men armed with guns. They also had a truck. They said they brought back women and children left behind on the other side.

Khol Do By Manto In Urdu Pdf Olden

He gave them a description of his daughter. “She is fair, very pretty. No, she doesn’t look like me, but her mother. About seventeen. Big eyes, black hair, a mole on the left cheek. Find my daughter. May God bless you”

The young men had said to Sirajuddin, “If you daughter is alive, we will find her”.

And they had tried. At the risk of their lives they had driven to Amritsar, recovered many women and children and brought them back to the camp, but they had not found Sakina.

On their next trip out, they had found a girl on the roadside. They seemed to have scared her and she had started running. They had stopped the truck, jumped out and run after her. Finally, they had caught up with her in a field. She was very pretty and had a mole on her left cheek. One of them men had said to her, “Don’t be frightened. Is your name Sakina?” Her face had gone pale, but when they had told her who they were, she had confessed that she was Sakina, daughter of Sirajuddin.

The young men were very kind to her. They had fed her, given her milk to drink and put her in their truck. One of them gave her his jacket so that she could cover herself. It was obvious that she was ill-at-ease without her dupatta, trying nervously to cover her breasts with her arms.

Many days had gone by and Sirajuddin had still not had any news of his daughter. All his time was spent running from camp to camp looking for her. At night, he would pray for the success of the young men who were looking for his daughter. Their words would ring in his ears, “If your daughter is alive, we will find her.”

The one day he saw them in the camp. They were about to drive away. “Son,” he shouted after one of them, “have you found Sakina, my daughter?”

The old man again prayed for them. It made him feel better. 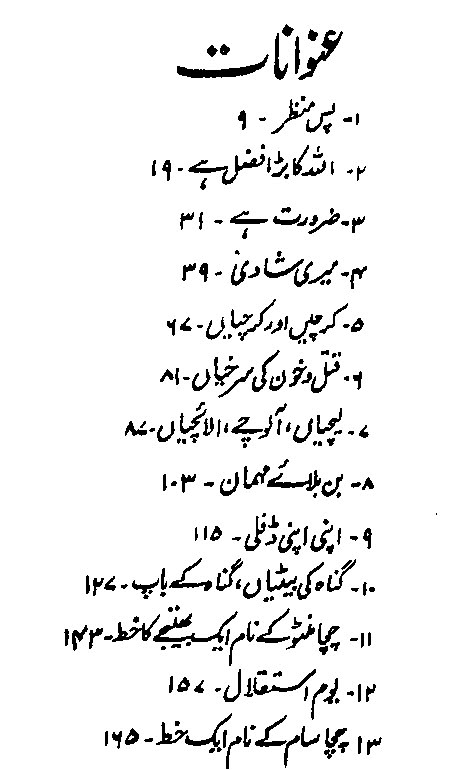 That evening there was sudden activity in the camp. He saw four men carrying the body of a young girl found unconscious near the railway tracks. They were taking her to the camp hospital. He began to follow them.

He stood outside the hospital for some time, and then went in. In one of the rooms, he found a stretcher with someone lying on it.

A light was switched on. It was a young woman with a mole on her left cheek. “Sakina!” Sirajuddin screamed.

The doctor, who had switched on the light, stared at Sirajuddin.

“I am her father,” he stammered. The doctor looked at the prostrate body and felt for the pulse. Then he said to the old man, “Open the window.”

The young woman on the stretcher moved slightly. Her hands groped for the cord which kept her salwar tied around her waist. With painful slowness, she unfastened it, pulled the garment down and opened her thighs.

Khol Do By Manto In Urdu Pdf Older Women

“She is alive. My daughter is alive,” Sirajuddin shouted with joy. The doctor broke into a cold sweat.

Khol Do By Manto In Urdu Pdf Old English