Clash'N Slash: Worlds Away. In Worlds Away like in original Clash n Slash you must defend your planet from alien invaders arriving from all around the galaxy. Alien hordes became more diverse and clever (more than 70 enemy types and 12 huge bosses). But you have two brave heroes on your side!

Clash'N Slash: Worlds Away is a sequel to our highly addictive arcade space shooter where players must defend the planet from aliens with a variety of space based weapons and power-ups.
In Worlds Away, as in our original Clash'N...
Read more

Clash N Slash - Non-stop action space shooter with simple controls suitable for all ages! Shooting has never been so addictive. Clash'N Slash arcade game will hold you for a long time and innovative bonus system will make your game experience colorful and fun.
TarQet - TarQet is a shooting game. Surely you've came across a shooting game where you wanted to replace the existing target with the one you could create by yourself. The attached programme Targetmaker allows you to simply make a target.
Platypus II - Platypus II is a wonderful shooting game in which you fly a spaceship.
iTankster - Addictive Tank Game - Free For 4th Of July Celebrations! Extremely fun tank shooting game, which will challenge you to the fullest. Do you have what it takes to destroy the skull and all the incoming enemies that are coming your way? Your objective is to defeat and dest
Alien Hallway - Alien Hallway is a totally new action- strategy shooting game for the PC developed by Alien Shooter series makers, Sigma Team company.
Anti Terror Mission - Shooting games, or shooter in short, is one of the most popular action game genre.
Action Solitaire - Play solitaire as an arcade game with Action Solitaire. Unlike regular solitaire, Action Solitaire is played for points against the clock in timed rounds. Action Solitaire has 52 different games. 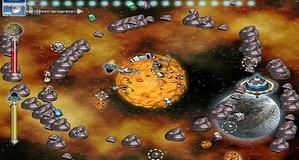 Comet Smasher - Comet Smasher is a free shooting game where you need to blast apart some comets. Your space ship entered a thick belt of comets in the middle of the Universe. Your only way out is to blast them all.

Zombie Shooter 2 - Zombie Shooter 2 is a unique blend of two game genres - Action and RPG.
Stande Shooting - Stande Shooting is an action shooting game.
Christmas Sudoku - Dracosoftâ€™s Christmas Sudoku is a great iconic twist on the standard Sudoku number game that everyone knows and loves.
Clear - Game of an average level of complexity. The objective of the game is the clearing of a field of multi-coloured blocks, placed on it. The clearing is carried out by turn of four blocks, selected by a framework.
More Software of 'Enkord'
Clash N Slash - Non-stop action space shooter with simple controls suitable for all ages! Shooting has never been so addictive. Clash'N Slash arcade game will hold you for a long time and innovative bonus system will make your game experience colorful and fun.
Gunrox - Create your squad of soldiers and battle with live players around the world in head to head or coop battles in this massively multiplayer online tactical game.
Totem Tribe Gold - Totem Tribe Gold is an adventure, real time strategy and hidden-object game.